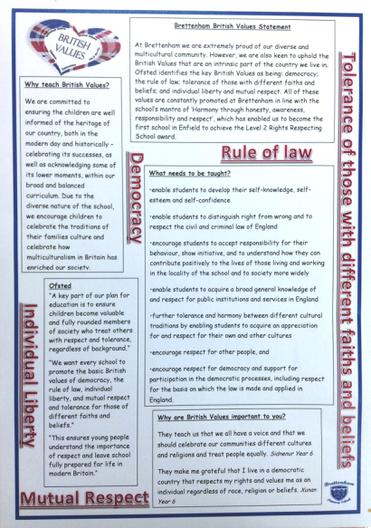 Curriculum
At Brettenham we are committed to ensuring the children are well informed of the heritage of our country, both in the modern day and historically – celebrating its successes, as well as acknowledging some of its lower moments, within our broad and balanced curriculum. Due to the diverse nature of the school, we encourage children to celebrate the traditions of their families culture and celebrate how multiculturalism in Britain has enriched our society.
Assemblies
Every week, assemblies on Monday, Tuesday and Wednesday are based around our weekly SMSC values (such as: tolerance, diversity and creativity) are an intrinsic part of what it means to be British and the values this country believes in.

Our Monday assembly in both KS1 and KS2 will focus on the British Value of Mutual Respect.

Every September, the children of Brettenham elect House Captains for the year. All children in Year 6 are invited to stand and candidates have to independently prepare and deliver speeches before members of their House Team democratically elect a Captain and Vice Captain to represent them during the year.